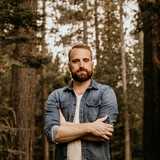 Indomitable American Indie Singer-Songwriter ROGER JAEGER shares hard-won wisdom and optimism in his newest drop, an ode to seizing your moment called “It’s My Time”. The Oklahoman maestro, known for his earthy vibe and proficiency on both guitar and sitar, has created a track that grows from gentle yet urgent to percussive and breathless in one smooth movement. With its light guitar plucks giving way to pounding military snare, the song embodies the ascension it describes. Anthemic and inciting, ROGER JAEGER uses this cut to declare in no uncertain terms that he has earned his impending moment and so does the listener. “It’s My Time” builds steadily out of ROGER JAEGER’s previous work, particularly the Post Coldplay Pop/Rock of his 2018 album “Fall Off The Earth”, but here he turns his usually introverted, self-knowledge laden lyrical prowess into an incandescent message of hope and encouragement. He lionizes the listener through a shared belief in hard work paying off. This connected extroversion gives the song qualities that will keep long-term fans in his camp, whilst also giving him crossover appeal into the world of Country Pop. “It’s My Time” was recorded in Nashville under the watchful eye of producer Paul David who has performed with Johnny Lang and Sister Sledge.