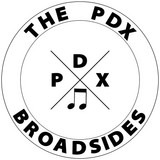 The PDX Broadsides, a Portland OR pop-folk trio, have been playing music together since 2011, and have become known for their harmonies and clever writing. The Broadsides love things, and as a result many of their songs are about the things they love. Turns out those things are basically nerdy. Their first Kickstarter, for their 4th CD "Trust Issues", funded in 16 hours and finished at 278% of their goal. The PDX Broadsides have played all around the West Coast at venues large and small. They've done conventions including OryCon (as musical guest of honor), GeekGirlCon, Rose City Comic Con, and GameStorm, or you may have seen them play in shows with The Doubleclicks, Marian Call, or Chamber Band. They have received two nominations for the Pegasus Awards for Excellence in Filk. Jessica Hebert is a PhD candidate in reproductive biology at Portland State University and performs as Quartermaster Greta for local piratical entertainers PDXYAR. Hollyanna McCollom is the author of the Moon Guide to Portland and builds costumes for cosplay and burlesque. Christian Lipski was Portland's foremost comics journalist and served as a judge for the comics industry's Eisner Awards.