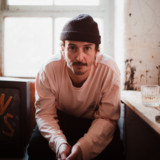 Graham Candy is an artist from New Zealand. In 2013 he moved to Berlin to begin his music career. Candy’s first collaboration with German DJ and producers Alle Farben, "She Moves" (far away), gained him quick popularity with his quirky, high-range vocals, as well as his first platinum single. His other collaborations with Parov Stelar, Robin Schulz, MOGUAI and Deepend gained him a strong following in Europe as well as in the U.S.A with “The Sun” reaching #1 on the electronic charts.   Performing at the likes of Lollapalooza, Glastonbury, Tomorrowland and Sziget festivals, Candy released his EP "Holding up Balloons" and his debut album "Plan A" which reached number #2 on the French album charts. Now after five years of touring and collaborating with other artists, Graham is resetting the button and starting off again on a solo venture, with his upcoming EP "Keep on Smiling".   Pictures - MPassin