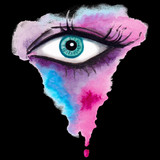 Raised in St. Louis, MO, ALiBRA was born with the gift of music and even began writing melodies at the age of 3 years old. However, her parents weren’t keen on the idea of their child pursuing an unsteady career as a musician so she focused on fashion, spending years as a corporate shoe buyer. A diagnosis of depression forced her to take a look at what was making her unhappy. It was obvious that the biggest contributing factor were the years that she kept her true self hidden. She then landed a job working at a recording studio and caught the ear and eye of a pop producer. She worked hard trying to fit into the pop mold but realized that she had more to say than pop could handle. She delivered music that was well received and lead to opportunities to record with various Grammy-winning musicians and producers, but she had no real emotional connection to what she was doing. She felt inauthentic and lost. So lost that she made a desperate attempt to end her own life. Through the love and support of her husband, she was able to find the right doctors who, this time around, properly diagnosed her as bi-polar. This was the beginning of a major turnaround for ALiBRA. She looked deep inside and began to heal through writing very personal lyrics in the hope of helping others. Through her art, ALiBRA has finally found who she is as a person. She does not follow industry conventions; rather she is blazing her own trail that is straight from her heart.