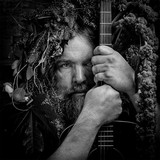 Nate Leavitt began paving his way within the music industry by playing various clubs in the Boston scene at age 16. Over the past 30 years, Leavitt joined several bands, sometimes multiple bands at once, before emerging from the side of the stage in 2011. Playing a style he calls Ghost Folk, Nate has announced himself as a gifted artist in his own right, with four solo releases under his belt, showcasing his rugged vocals and carefully crafted songwriting. Already a respected guitarist, his work as a solo artist has resulted in multiple Boston Music Award nominations