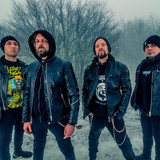 Previously known as Scapegoat, the band released their first full-lenght album "Let The Madness Begin..." in 2003 for the record label Temple Of Noise (distributed by Frontiers Records). For the promotion of the first album the band have played all around Italy and abroad as supporting act of Dismember, Enthroned, Tankard and Konkhra. In 2006 Enemynside recorded their second studio album "In The Middle Of Nowhere" at 16th Cellar Studio (Fleshgod Apocalypse, Hour Of Penance); it was released in 2007 for Sleazy Rider Records and re-released in 2008 through Hatestone Records/New Model Label. The band have had the opportunity to play in clubs and festivals abroad with Paul Di Anno, Evergrey, All Ends and Sabaton; in 2009 they did a Scandinavian tour as support act for Blaze Bayley. In January 2012 the band had played in U.S.A. for Freedom To Rock (Loretta Palacios/Raymond Herrera). In the same year their third studio album “Whatever Comes” was released through Mighty Music/Target Distribution; the album has a guest solo by Richie Kotzen. From 2013 to 2016 the band went on hiatus. In 2017 the band played live gigs with acts such as Destruction and Behemoth, then in January 2018 the new EP “Dead Nation Army” has been released. Between Spring and Summer 2019 Enemynside played in Spain both as headliner and as support band for Flotsam and Jetsam. while recording a new full lenght at 16th Cellar Studio. On October “CHAOS MACHINE“ has been released through Rockshots Records.