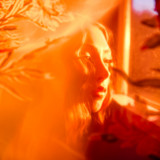 With her 2019 debut EP "Girl, I Know," Baker Grace emerged as an artist of understated yet undeniable confidence. Having earned lavish acclaim for her boundary-warping breed of pop, the 19-year-old singer/songwriter has only deepened that sense of self-possession over the past year, creating her own charmed reality far apart from the masses. On her sophomore EP "Yourz Truly," Grace illuminates her inner world and personal philosophies more freely than ever, sharing her story with equal parts boldness and dreamy sensitivity. A deeply intimate body of work, "Yourz Truly" takes its title from Grace’s longtime love of writing letters. “Each song is a letter to myself or to somebody else, because writing letters has always been one of the best ways for me to be completely truthful,” she says. “It allows me to get down to the core of what I want to say, which is the main goal in all my music: to be as raw and honest as possible.” In bringing the EP to life, she also amply mined her love of R&B and hip-hop. Made alongside collaborations with rising star Cautious Clay and producers like Stefan Accardo and Scott Harris (a hit making Grammy Award nominee who’s worked with Shawn Mendes, Sasha Sloan, Chelsea Cutler, Chance The Rapper, Kygo, The Chainsmokers), "Yourz Truly" channels that hip-hop influence into Grace’s nuanced but commanding vocal delivery.