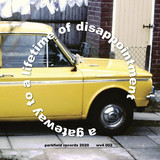 Wolverhampton UK born David Newton was the guitarist and songwriter behind C86 popsters & NME cover stars turned US college radio chart-toppers The Mighty Lemon Drops. After the break-up of the Drops in the early 90s (& following a stint w/ Blue Aeroplanes) Dave relocated to LA in 95 where he turned his garage into a recording studio & has since produced & engineered countless records inc Little Ones, Soft Pack, Henry Clay People, Blood Arm, Happy Hollows to name but a few. Since the Paint The Town EP in 2011, Dave has concentrated on his production work, squeezing in the occasional live shows w/ his own band of musician pals (inc shows with Peter Murphy/Mike Watt/Tim Burgess). So, 2020: kicking things off on July 17 is a new Thee Mighty Angels single The Songs That Changed Our Lives w/ lead vocals by Dave’s pal Eddie Argos from Art Brut. It's a “list” song of Eddie & Dave’s favourite records with a video inc all of said well-worn 7” singles. The song had it’s debut on the legendary Rodney Bingenheimer's radio show followed by it’s video premiere on renowned blog Slicing Up Eyeballs. Following on from the single will be a full-length album A Gateway To A Lifetime Of Disappointment on 8/14/20, ten songs chronicling both the joys & the disappointments of what life throws at us. David Newton & Thee Mighty Angels continues on from the earlier elements of The Mighty Lemon Drops sound, with a modern contemporary take on the melodic uplifting side of the 80s post-punk sound.