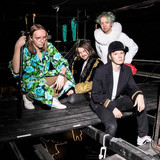 Yournalist describes their music as “Music for people with unprejudiced minds who are tired of dullness.” Band was formed by accident in 2009 at the very same hunting cabin, when Oskari Ruohonen (Guitar, Vocals), Santeri Ruohonen (Bass) and Mikko M. Koskinen (Drums) decided to spend an innocent weekend at the summer house. The result was a hangover, twelve songs and one band. In spring 2011 Yournalist released a critically acclaimed EP “Slippery and Infected” which resulted in being chosen as one of the “Twelve bands to watch in 2012″ by Finland’s #1 music mag, Rumba and national radio channel YleX. Spring 2012 band released their debut album “Horror and Terror” which is a mixture of pop-rock songs played with a heavy metal attitude and the arrogance of progressive music. On February 7th of 2014 the sophomore album called “Plays Jazz” followed. It’s a bittersweet cocktail made out of pop and rock plus a little bit of everything. Themes in the album are food, sex, partying, pills, hot mamas and highways.. to name a few. Yournalist played live in studio so that the energy of the live shows would be captured on tape as authentically as possible. The album is written, produced and mixed by the band itself. Plays Jazz is an elegant selection of song from the most hipster band in Finland. Oskari Ruohonen – vox, guitar Santeri Ruohonen – bass Mikko M. Koskinen – drums Ilmari Aitoaho - keys