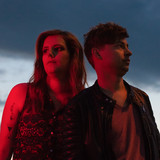 Black Holes are two piece band - Kate (bass, vocals) and Martin (drums, vocals). They have a unique setup with captivating and uncompromising, full, sound (similar to British Royal Blood). At the same time, they have melodic catchy foundation on which they build their songs. Black Holes are based in Prague, have released four singles, one debut album called "No Silver Lining" and two music videos.