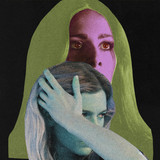 Formed in 2014 after being introduced online the pair quickly put together demos which received a great response from friends & fans alike. The DIY video for the track Think went viral overnight & they signed to Lex Records to release their debut EP in 2015. Think appeared in cult Keanu Reeves movie John Wick, in the now infamous bath house scene. The Detune EP followed in 2016, & while the duo toured with everyone from Alt-J to Roisin Murphy, their first album started to emerge. The release of 2017’s acclaimed debut Tear The Roots featured a slow-burning cover of Nena's 80s classic 99 Luftballons, which later appeared in Atomic Blonde starring Chalize Theron. After a long period in the UK, the duo’s German/American vocalist Christina returned to live in the US, whilst her musical partner & producer Cicely remained in London. Odyssey (their upcoming album) is a graceful display of collaboration against the odds. The fact that its creators were separated by thousands of miles meant in many ways that the pressure to perfect their second album was off - “Not living in the same country made us think we had nothing to lose.” Odyssey might have been one mighty trip to make – but that only makes its arrival all the sweeter.