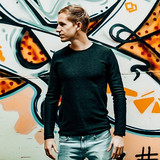 Hailing from Kaiserslautern, Germany, Martin Mix first steps into dance music were characterised by releasing music on his own. After receiving attention from Spotify and got added to one of the biggest EDM playlists "Dance Rising", mostly every common EDM record label was interested in signing his music, which were released on labels such as Spinnin' Records, Robbins Entertainment, Gemstone Records, 2-Dutch and Sirup Music, just to name a few. The leading DJs in the music industry such as Hardwell, Tiësto, Don Diablo, Showtek, Robin Schulz, Brooks and many more supported his music. His tracks were constantly played in the biggest radio stations worldwide or in big television shows like the „Voice of Holland“ and have been listed in Beatport, Apple Music or iTunes charts several times. Radio Show Inquiries: martinmixradioshow@gmx.de