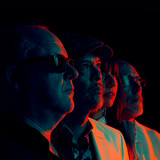 The making of the third new album since Pixies reformed in 2004 was cold on the bones, but warm on the marrow. After three decades beset with upheavals, splits, trials, and tribulations, Pixies was finally a band at ease with itself.

Their first era - when Charles Thompson IV returned from a student exchange trip to Puerto Rico, dropped out of college, renamed himself Black Francis and, in January 1986, convinced his ex-University of Massachusetts Amherst roommate Joey Santiago to start a band with him - redefined alternative rock and set the dynamic blueprint not just for grunge but underground guitar music for decades to come, but it was as fiery and turbulent off-record as on. Francis turned his Pentecostal upbringing, flair for all things Spanish and interest in the seedier, more violent Biblical tales and mythologies into gruesome yet melodic punk noirs on seminal early albums Surfer Rosa (1988) and Doolittle (1989), and indulged his sci-fi obsessions on the silvered savagery of Bossanova (1990) and Trompe Le Monde (1991). The combination of Francis’s rabid roars and saccharine pop babbles, Santiago’s rattlesnake guitar squirms, Dave Lovering’s brutalist drumming, and Kim Deal’s cat-purr basslines had made them influential, era-defining indie rock giants. New album, Beneath The Eyrie recaptures the rabid velocity, boundless invention and vivid, enveloping aesthetic of Pixies’ legendary early albums without feeling the need to recreate them.