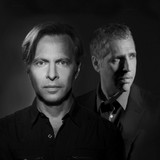 Johnny Hates Jazz are a British band, currently consisting of Clark Datchler and Mike Nocito. The original line-up also included Calvin Hayes. Phil Thornalley replaced Datchler in 1988 for a brief period. The band is best known for a cycle of hits in the late 1980s, the most successful being Shattered Dreams. Released in 1987 it became a top 5 hit in the UK, throughout mainland Europe and Asia, and reached number 2 in Japan. This was followed by subsequent singles: I Don’t Want To Be A Hero, Turn Back The Clock (featuring Kim Wilde on backing vocals), Heart Of Gold and Don’t Say Its Love. In 1988, Shattered Dreams reached number 2 on the US Billboard chart, number 1 on the US Adult Contemporary chart, and climbed to number 4 in Canada. That same year, their album Turn Back The Clock entered the UK charts at number 1, selling over four million copies and going triple-platinum in the process. Since then, Shattered Dreams has got on to be played over 3.5 million times on US radio alone. Johnny Hates Jazz parted ways at the height of their success, and were to be the last electronic band to emerge in the 1980’s. However, after many years of pursuing individual projects, Clark and Mike decided to reunite in 2010, resulting in the 2013 album Magnetized. From then until now, JHJ have performed extensively throughout the World. In 2018, the band released a 30th Anniversary edition of Turn Back The Clock, which included brand new acoustic versions of every song on the album.