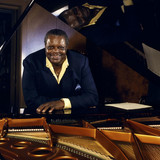 OSCAR EMMANUEL PETERSON, CC CQ OOnt., is one of the most prolific jazz pianists of all time. Born on August 15th, 1925 in Montréal’s Little Burgundy, music was a part of Peterson’s life from the beginning. In 1949 after leaving high school and working full time with his own trio, world-renowned jazz impresario Norman Granz heard a live broadcast of one of Peterson’s performances and invited him to be a guest at one of the famed Jazz at the Philharmonic concerts at Carnegie Hall. Peterson accepted, and soon found himself making his US debut in a duo setting with bassist Ray Brown. In 1950, Peterson joined JATP as a full-time member, which saw him touring the world with the likes of Benny Carter, Buddy Rich, Herb Ellis, Roy Eldridge, Clark Terry, Lester Young, Lionel Hampton, Dizzy Gillespie, Ella Fitzgerald, and so many more. Over the course of his six-decade career, Peterson (an 8x GRAMMY Award winner) received global recognition both for his dedication to music and the arts, and for his work as a humanitarian. In 1962, Peterson composed Hymn To Freedom, while in the studio recording one of his most popular albums, Night Train. Lyricist Harriette Hamilton

penned lyrics to the song the following year, beautifully embodying the message of freedom that Peterson wanted his music to convey. Peterson’s efforts as a Humanitarian and his firm belief that every individual be seen as equal were widely recognized and in 1984 he was appointed a Companion to the Order of Canada.