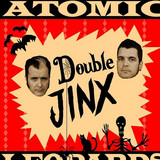 to their friend Toni Meler, who also was the sound engineer on the recording of the second Hellbilly Club album titled “Hell-o”. They started to record some tracks they like. After some “demos” decided recording more songs till the first album in 2006.