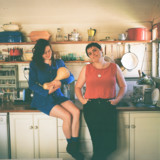 Born into the arms of the Folk music community in Australia, Maggie and Elsie were side of stage at their first folk festival when they were four weeks old and have been absorbing and exploring folk music since that time. Since 2014, The Maes have been full time touring in Australia and overseas, winning over audiences with their striking songwriting, intricate instrumental arrangements and stunning vocal harmonies at some of the worlds largest and most prestigious music festivals such as, the Woodford and Port Fairy Folk Festivals in Australia, The Edmonton and Vancouver Folk Festivals in Canada, Cambridge Folk and Celtic Connections festivals in the UK and the Telluride Bluegrass Festival in the USA.