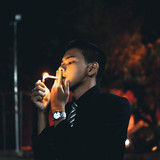 Multitalented Singer-Songwriter Muhammad Ibrahim or well known as Wevvss started his music journey in 2017 when he became executive producer for his friend Album. Started from that day he becomes one of the most creative producers in the underground scene, working with a lot of people like Chūsha, Agung Sukarma, Henry Firstya , And more. In 2020 he released his first studio EP “Soul 19” and start his journey to become a singer and a rapper. For Him Originality is the key, and that’s why he produce and engineer his music, all by himself. Right now he release a total of 5 EP with outstanding 64.000 streams to date. He got inspired a lot by RNB and Hip Hop genre. The Weeknd, Drake, Bryson Tiller, and J. Cole are the artist that Inspired him. He also teaches and mentors people via social media, he teaches people how to engineer songs, how to distribute as an independent artist, and how to stay creative every day, and he hopes the knowledge that he shares can be useful for all people. In the end, he wants that his music can connect with people and inspired more people to do music and art because for him expressing ourselves and making art is one of the most important things.