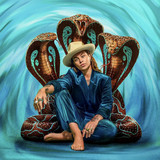 TASH SULTANA is an explosive global producer and artist who has commanded attention worldwide since homemade videos went viral on YouTube. ‘Tash’ was soon selling out major arenas, a string of sold out world tours and headlining the world’s biggest festivals – no mean feat for an artist who just a year before was recording songs on a go pro in a bedroom back in 2016. Since Tash’s grandfather gifted a guitar at the age of three, the artist developed a love for self teaching an array of different instruments around the guitar knowledge which they had been taught as a young kid during primary school. Quickly developing a unique style that has seen Tash breaking record attendances around the world. Tash plays over 12 instruments ( guitar, bass, drums/ percussion, piano/ keyboard/ synth/ Oud, trumpet, saxophone, flutes, Pan pipes, Sitar, harmonica, beat production) with guitar as their main love, a self trained vocal that reaches over a 7 key range and a live show that needs to be seen to be believed. You can now pre order Tash Sultanas latest album NOW - available Feb 19 The fourth release 'Willow Tree' Ft Jerome Farah is available worldwide now.