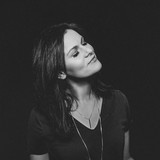 When Marie Miller writes a song, she does what all gifted writers do: She looks at her life and into her heart to make sure what she creates comes from real emotion and experience. She does something none of peers likely do: She searches through classic literature, whether it be Dostoyevsky, Tolstoy or Homer. There, she finds parallels for what she wants to say, channels that inspiration into her lyrics and comes up with something unique: Music that’s immediate and timeless, driven by feelings all listeners can relate to yet infused with a perspective that transcends the present. “I have a song called ‘Story’ on my new album,” she explains, referencing Letterbox, released on April 28, 2017 on Curb Records. “It brings in a lot of epic characters: Heathcliff and Catherine from Wuthering Heights, Hector’s wife Andromache from The Iliad. I’ve always loved epic stories — Anna Karenina, The Brothers Karamazov, Crime and Punishment — because they’re filled with relationships that are super serious and dramatic. Sometimes I feel like I’m right there in the midst of them.” Letterbox is a celebration of freedom. Still young, she has survived over 10 years in the music business. She impacted initially with the infectious, “You’re Not Alone,” where more than 115,000 downloaded that single on Amazon. ABC’s Dancing with the Stars featured her second single, “6’2,” in 2014. And in 2015 she performed for Pope Francis at Festival of the Families in PA.