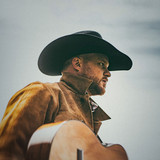 Human The Double Album is the sophomore major-label release from COJO Music/Warner Music Nashville Platinum recording artist Cody Johnson and will be available October 8th on all digital music platforms. Known for his explosive live shows and electrifying stage presence, Johnson has established a following of passionately loyal fans who regularly sell out shows across the country and have helped him accumulate more than two billion streams worldwide. The recipient of multiple ACM and CMA Awards nominations, his RIAA certifications include two Gold-selling songs (“Nothin’ On You” and “With You I Am”) and the Platinum-selling, Top 10 single, “On My Way To You.” Named one of NSAI’s 10 Songs I’d Wish I’d Written 2020 and ASCAP’s Most Performed Songs of 2019, “On My Way To You” was featured on his first major-label release, Ain’t Nothin’ to It, which skyrocketed to No. 1 on Billboard’s Top Country Albums and all-genre Digital Sales charts. Johnson also re-recorded one of the project’s standout tracks, “Dear Rodeo,” as a powerful duet alongside country music icon, Reba McEntire. The song inspired his autobiographical documentary Dear Rodeo: The Cody Johnson Story. With guest appearances by McEntire, Navy Seal Chris Kyle’s widow Taya and more, the film showcases Johnson’s real-life journey from the dusty rodeo arenas of rural Texas to some of the biggest musical stages in America, explaining how his years on the rodeo circuit fortuitously prepared him for his life as a country star.