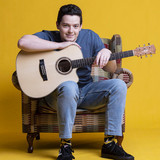 Award winning Fingerstyle guitarist and composer, Jordan Brodie, is regarded as "one of the best young guitar players in Australia". With a fine sense of showmanship and technical virtuosity, Jordan is well on his way to a flourishing solo career. Hailing from Cairns, Australia, Jordan is set to realise his latest album "Riff Raff" in 2020! The album showcases his fun, cheekier side with catchy, groove-based tunes (and of course a few ballads!), drawing on inspirations such as Tommy Emmanuel, Emil Ernebro, Michael Fix and Joe Robinson. In support of his new album, Jordan is embarking on his first New Zealand tour in March 2020, followed by an extensive tour of Australia. Jordan is known to dazzle audiences with his Fingerstyle guitar technique; playing the bass, rhythm and melody simultaneously. He has toured Australia and performed in Canada, Ireland and Germany. Performance highlights include: Tanks Arts Centre (Cairns), Newport Fiddle and Folk Festival (Melbourne), Lions Bay House Concert (Vancouver), CastleHacket House (Galway) and performing with Michael Fix in Berlin, Germany. Don't miss the opportunity to see this emerging master of the guitar!