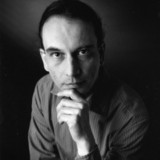 At university, Rüdiger Gleisberg majored in Music Studies, and has been working as a composer and music producer since the end of the 80s. This has included CD productions under his own name, which Gleisberg impregnated with his inimitable style of symphonic electronic music, as well as collaborative projects with Elmar Schulte (Solitaire), Mathias Grassow (Karmacosmic, Nostalgia), Alquimia, Lotus Space and Bernd Scholl among others, creating milestones in the art of sound. Gleisberg’s work is rounded off by a large number of commissions for film productions, together with audio dramas. Music composed by him (in cooperation with Elmar Schulte) was also used for the Hollywood production “Blade”. In addition, Gleisberg composed music for TV nature documentaries.