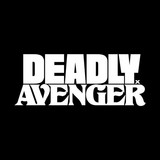 Having cited the obligatory downtempo influences - from the spooked atmospheres of The Exorcist through to the synth orchestration of John Carpenter - it was hardly a surprise to find Damon Baxter's early material for J Saul Kane's Electron and Depth Charge imprints a blend of arepeggiating vintage keys and shuffling electro rhythm sections. A series of remixes for the likes of Travis, the Charlatans and Stereophonics - together with his own accomplished contributions to Pussyfoot, Fused & Bruised and Wall of Sound - reinforced an enviable reputation in the studio before the launch of his own Illicit label. Deep Red, his debut album released in the fall of 2002, expanded upon previous singles, panning from a growling brass section in a rework of the highly sought after "We Took Pelham" to a spine tingling crescendo provided by a 47 piece Hungarian orchestra. Like contemporaries Easy Access Orchestra, Blue States and Ninja Tune's Herbaliser, the Avenger is far more than just a dash through string strewn cinematic streets, touching upon thoughtful electronics and eased listening with a resultant aural tapestry as accomplished as they come. ~ Kingsley Marshall, Rovi