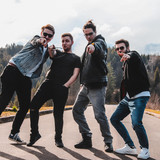 VOYAGE TO INFINITY – the name of a German Synth Rock Band from Bavaria you better should memorize. After founding the band in March 2020, the first single called “The Greatest“ was released in August. As the name of the band suggests, this single is only the beginning of a terrific journey which never should find an end. Creating a modern and massive sound, they combine elements of Rock music with components of synthesizers, wrapped in melodic and soulful lyrics which will let you participate in all the transmitted ernergy. Tought-provoking songs about well-known topics such as love scenarios or world problems will meet danceable hooks with bouncing parts. Their first single “The Greatest“ transmits exactly the love regarding music why the newcomer formation stands out. They want to let you all feel this vitality and dedication they are made of. The members are Vinzenz Ständner, Adrian Triebner, Kevin Dubian and Fabian Burkert-Mazur. Be part and follow them on the VOYAGE TO INFINITY.