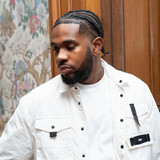 Ramone Rochester, otherwise known as his stage name Ramz, is a UK rapper and singer from South London. At the age of 24, Ramz embraces all genre’s of music, soaking up different cultures while adding his own flavour to it.   Ramz’s hit song ‘Barking’ peaked at number two in the Official UK Singles Chart, going Platinum in March 2018, earning him a prestigious nomination at the 2019 BRIT Awards for single of the year. Since then, Barking has gone on to become a Double Platinum single in January this year. Following on from Barking, Ramz followed up with ‘Family Tree’ which is now a certified Gold record. Ramz also received huge acclaim for his track ‘Hold You Down’ which is on its way to becoming a certified Silver record.   Last year, Ramz decided to show audiences his versatility by releasing more hard-hitting tracks such as ‘Brixton To Oxford Circus’ and ‘Scratch Cards’. So far in 2021, Ramz has linked up with the likes of PnB Rock & K27 on ‘Money Goes’ as well as Kid Ink & K1ng on the ‘My Name’ remix.   Ramz is now looking to end the year with a bang, as he’ll look to return to a more melodic, catchy sound which saw him reach the heights aforementioned.