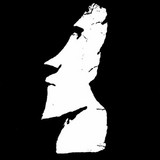 Since forming in 2016, The Easter Island Statues, comprised of Donald Campbell (guitar/vocals), James Askwith (bass/trumpet/french horn) and James Gallagher (drums) have been percolating eardrums and irritating the man in hometown Oxford, London and further afield with their paradoxical brand of brass-injected alternative rock. Drawing comparisons to the likes of The Strokes, Maximo Park and Husker Du, the band’s debut EP 'Why Don’t you Live in the Garden?' saw the band garner international recognition, including US college radio play on WFUV in New York and a placement for O’Neill's ‘Hit the Road’ wakeboarding series. On 25 July 2019, the band released their second EP: 'I Wouldn't Worry About It', before embarking on their first tour of the UK and Germany in August, including London, Cologne, Mülheim, Hamburg, Twistringen, Berlin and Oxford. In January 2020, 'Laika' from their second EP was featured on the E4 show 'Tattoo Fixers'. In 2021, Don began a side project known as The Kite Society and, in May 2021, began releasing a steady stream of more mellow and laid-back indie tunes that didn't quite fit right with EIS. His next single 'Limoncello' is due for release at the tail-end of September.