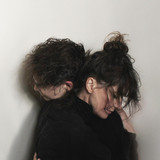 The Golden Filter, originally from NYC, are a London based Art-Disco duo consisting of Penelope Trappes and Stephen Hindman. They released the italo disco inspired track “Solid Gold" in 2008, and have since steadily released singles, EPs and albums on labels like Vinyl Factory, Brille, Kitsune, and are currently releasing on Optimo Music with darker techno tracks and minimal wave, and odd analog pop music. Since relocating to London, The Golden Filter have been making music, writing film soundtracks, playing live and DJing throughout clubs and festivals all over Europe and beyond.