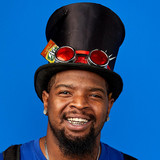 Southside Atlanta, GA. Yoshi Crew Ent would like to introduce Y0$#! (Yoshi) The self-described "Nerd raised in the hood" was born Christopher Jackson in 1987 to a religious family in Cincinnati, Ohio. The mean streets of Downtown, Winton Terrace, Avondale, Bond Hill, Price Hill, and Colerain Township exposed Yoshi to the harsh realities of the inner city and helped mold him into the man he would ultimately become. It was at the age of 11 that Yoshi got a taste of hip-hop music while riding to and from elementary school on the bus. The drivers would play all of the popular radio hits, and it was then that Yoshi caught the Musical Bug. Growing up listening to Jazz, or Latin Music, or Religious tunes, Yoshi was in awe at the creative expression these artists could use to paint a picture for the listener. His teenage years found him navigating the streets of Atlanta, GA. trying to find a way up out of the struggles he had become accustomed to. Watching his older brother put out music inspired Yoshi to pick up the mic by freestyling over beats and video game intros. He wasn't taken seriously but found joy in making music, so he pursued his passion as a hobby. It wasn't until high school when Yoshi met individuals of a like mind and formed Jus Us in 2006. A collection of Blu (Yoshi's former moniker), Jody, Juice, and Josh. The group would ultimately evolve into Yoshi Crew Ent