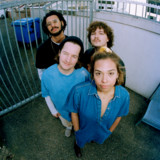 ‘’ TAPE TOY counts 4 members. Each an individual, each with their own personality. Throw them into a small and smelly rehearsal space or on a big stage and the 4 merge into one incredible force. The chemistry has been there since the beginning, now, three years, seven single’s and countless of shows later they’re stronger than ever.   It shows that practise makes perfect, because on their new album, TAPE TOY shows that they have grown in every aspect. Everything’s turned up a notch; the songs, the production and the performance. When the band first came out they seemed like a bunch of carefree youngsters with a clear mission; playing shows and having fun. On their new album the band isn’t afraid to show a more serious side. The songs show more depth and some of them even lean to the darker side. Under the surface it has always been there, but now TAPE TOY dares to show it.   It has its reasons. Everybody knows 2020 was a disaster year for musicians, for everybody. Not being able to perform was really hard for the band. Like taking away a toy from a toddler or a paintbrush from an artist. Despite this all, TAPE TOY managed to stay positive and write heartfelt songs without being too dramatic. It’s still a light-footed band who fluctuates between sparkly pop and witty rock. The band will always succeed to surprise but above all; it doesn't sound forced or pretentious, it doesn't sound like a one trick pony, they just sound like TAPE TOY. ‘’