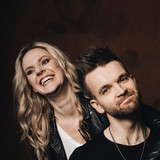 “I wanna be a knight who stands for nothing but love. But can all this be in a world that’s still dark”

(aus: True Lovin’) Energetic, boundless, and emotional - that's the music of SISKA'S Element, an alternative rock/pop duo from the south of Germany. On stage, SISKA'S , Element reaches out to their audience and knows how to stir things up with fiery lyrics, rousing riffs and beats which make you want to get up and dance. Together with Michael Ende on bass and Chris Evans on the guitar, SISKA'S Element creates the sort of energy live which captivates everyone. Angels Cry - The debut album of the pop/alternative duo is bursting with vitality. Energy is also what they needed to be able to transport those not always easy thoughts, directly into the hearts of the listeners. This vibrant album is full of interesting twists and deep lyrics. The 12 tracks were mainly recorded in the Trick Studios and the SoulFulFactory Studios in co-operation with Tom Schenk. With the title “Help Me Out” the band articulates the cry for help, of so many souls in this world that nobody wants to hear. The 2nd single “Smile” is dedicated to a good friend of the singer, it speaks for itself. Angels Cry is completely different than the title might suggest, it’s a record that not only plays the quiet sounds that music has to offer but it also hits the ceiling and says what’s already been said.