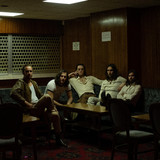 The core of Tempesst started more than a decade ago in the small coastal town of Noosa, Australia, with twin brothers, Toma and Andy Banjanin. Growing up in a musical family, the pair joined the church band at 14 years old and performed regularly for the next few years.

It was there that they met Kane Reynolds and Blake Misipeka, who years later now serve as the keyboard and the bass player for Tempesst. In the late 2000s, after a short stint in the UK, the two moved Williamsburg Brooklyn, NY.