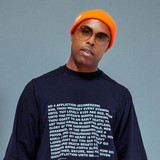 Grandson of a generation of cape-verdeans who departed to Holland, Nelson Freitas started in 1997 as part of Quatro, a band who was exploring a new sound, halfway through zouk and kizomba, with r&b and hip hop influences. Their three albums, released over seven years, brought them success in countries like Cabo Verde, Angola or Mozambique & Portugal.   “Magic”, the debut album, arrived in 2007, followed by “My Life”, in 2010, and “Elevate” in 2013. All these albums have a lead single that tells a story of growth: from “Deeper” to “Rebound Chick” and “Bô Tem Mel”, the latter becoming a pivotal moment on Nelson’s career.   Then came “Miúda Linda”, the ideal calling card for Nelson’s 2016 album “Four:” “I went completely opposite of “Bô Tem Mel”.Miuda Linda became the biggest song so far with over 54 million views on youtube.   The follow-up single, “Break of Dawn”, with Richie Campbell, also helped shape the album: “That song is an example of what I had in mind with this record: breaking boundaries. Other collaborations include Mayra Andrade, Mikkel Solnado and Loony Johnson and then the album Four was born and went platinum.   The latest album is called Sempre Verão and was released in September 2019. With the hit singles Bolo Ku Pudim, Manha Cedo & Dominar Nelson sails of on yet another Journey.