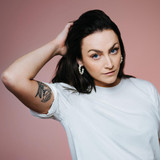 Hildur is a multi-faceted rising female pop star from the tiny (yet magnanimous) island country of Iceland. Her competitive nature drove her forward from sports through band life and finally to a promising solo career that is spiked with an Icelandic Music Award for Pop Song of the Year 2017 in her homeland.   Hildur challenges herself in everything she does. “I’m a firm believer in saying YES” she says, setting up next goals and pushing herself further and further. As Iceland’s rising pop star, Hildur’s is more than just a singer. She is also a songwriter, lyricist and professionally trained classical cellist. However, don’t expect sweet-as-sugar pop from her. Hildur also uses her craft as a platform to spread a message - one of gender equality and positive role models - that she also embodies in life. Hildur’s self-awareness as a woman in the music industry and her need to lead by example for gender equality is noticeable in her music, image and team she chooses to work with.   Hildur is not only a quirky personality with great songs, she also is known as women's rights and gender equality activist, aka the perfect material for the world's next pop queen. Her powerful energy, colorful live show and impactful message will make you want to throw your arms up and shout YES!   Contact: ania@chimes.pl