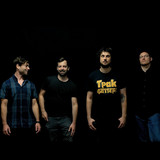 Witchrider formed 2012 in Graz, Austria. The fact that Arnold Schwarzenegger was born in the same town as the guys in the band obviously have had effect on the music that's become true Grazian stoner rock. A version of stoner rock that may not be super heavy but it's full of groovy tunes and melody. On the new album “Electrical Storm”

that will see the light on Nov 13th the mixture of loud and heavy guitars with dark electronic elements and strong vocals will explode in the audiences faces and hearts like a tender strawberry smoothie blast from a catapult. The idea for the bandname was taken from sleep paralysis aka. “riding the witch”.  After the critical acclaimed debut album “Unmountable Stairs” the second full length record “Electrical storm” is finally on it’s way out Nov 13th 2020- First single 'You Lied' is out now! The album has 11 smashing songs and not a dull moment this will take you on a very enjoyable musical journey. Since releasing their first EP in 2013, Witchrider have been a vivid part of the European rock scene. Signing with “Truckfighters” own label Fuzzorama records just a year after and releasing their debut full length album in 2014. They also toured numerous times all across Europe with some of the best and coolest bands in the genre. Pre order the new album from www.fuzzoramastore.com