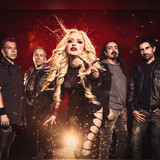 EASY RIDER was founded around 1988, born of the reunion of Javier Villanueva (guitar), Daniel Castellanos (guitar) and Antonio M. Chaves (drums). A year later José A. Villanueva (bass guitar) . Their first album was released in 1997, named “Perfecta Creación”. Between 1998 and 2000 they published two albums, titled “Lord of the Storm” and "Evilution", but in January 2001 Eugenio Garañeda and Antonio M. Chaves decided to leave the band. In February 2001 Rafa Díaz joined the band to play drums and in October 2001 the vacant for the band’s singer was filled by Ron Finn. Between 2002 and 2003 they published two albums, titled "Regeneration" and "Animal". After the “Animal on the Loose Tour ’04” the band members combined EASY RIDER shows with other projects. In October 2014 “From the Darkness” was publised through Krea Film Producciones. In 2020 they are back. With Javier Villanueva and Dani Castellanos on guitars and José A. Villanueva playing bass guitar. Playing drums will be José Roldán (NOCTURNIA, KABALAH and PADRE CUERVO). After 32 years of career with different male singers, for the first time there will be a woman in charge of leading EASY RIDER with her impressive and powerful voice. Her name is Dess Díaz: a singer who has been getting on stages since she was a child, and in the last years she has been part of the Málaga based band PERVERSION, a Ronnie James Dio tribute band that plays songs form BLACK SABBATH, RAINBOW and DIO.