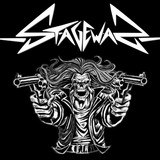 With a 60HP T4-Bus across the Alps to Ancona (Italy), back across Germany to Słupsk (Poland) and from the Dutch North Sea coast to the smallest hicktown of the Czech Republic - STAGEWAR is a tireless Live-Band from metropolitan area Frankfurt, that never gave up on following its goals even under the worst of circumstances. The german metal band, founded 2003 by the guitarists Kimon Roggenbuck and Dominik Dezius, both sixteen at the time, has played more than 200 concerts to date and made a name for itself in the underground throughout Europe. The band describes their music as straight Thrash with a good dose of Rock'n'Roll. After the release of four self-produced demo CDs, self-made music videos and several live shows, the critically acclaimed debut album "Living On T(h)rash" (at VinterSon) was released at the end of 2011. Two self-organized European tours followed its release. In October 2016 the second longplayer "Killing fast" was released at Bellaphon/bacillus. The album was celebrated in the scene and received consistently good reviews. The limited special edition on cassette was immediately sold out and found remarkably many listeners in Asia. Music videos were released for the singles "Isolated", "No place to go", "Waste of time" and "Living Hell". This was followed by the "Killing fast" tour.