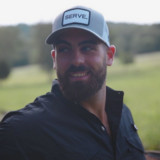 Omer Netzer is Israel’s biggest country music entertainer and the hottest ticket among mass audiences in his home country His smokin’ hot guitar talents, combined with gritty vocals, soulful sound and humble boyish charm set him apart as a country music heartthrob to watch. Omer is characterized by his outspoken pride in God and a country way of life as a common thread in his core beliefs. His recordings combine a mix of blues and southern rock; gripping vocals and impeccable electric guitar skills are attention-getters from the get-go.

Proficient on guitar and drums, the instrumentalist and captivating vocalist has been likened to some of the most renowned entertainers, and some of his personal heroes, including John Mayer, Chris Stapleton, Eric Clapton and B.B. King. The army veteran launched his music career in 2015 with the debut album GOODBYE SONG. An instant success, the record highlighted hit singles "Angel,” "Couldn't Love You More" and the title track "Goodbye Song.” His sophomore album, titled SWEET MISTAKE and released in 2017, solidified his stature as a country music star in all of Israel. An extraordinary and talented guitarist, powerful vocalist, with a commanding stage presence and enchanting charisma, Omer Netzer is trendsetter – to take the first step in carrying the torch to open the door for hopeful country artists to follow.