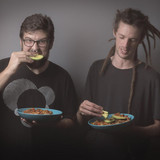 Music about avocados. And arcane mathematical and scientific advances. But mostly avocados. Formed in late aughts by Sydney, Australia’s Bill Day ( @Mr. Bill ) and Ryan Whare ( @Ryanosaurus ) as an outlet for their off-kilter brand of doof material that was at the time deemed too intricate for psytrancers and too clubby for glitch-hoppers, Electrocado laid in wait, popping its twin heads up every so often to plant an album worth of techy trance and complextro amongst the desolate bog of the international dance scene before retreating back to the studio to cook up more bizarre concoctions. 2011’s The Hass Effect became an overnight viral sensation amongst house fans searching for more. 2015’s Scribble implored glitch heads to give dance music a go. Performing at Ometeotl in Mexico, Regen in Australia, and the infamous Boom Festival in Portugal, the duo’s once inscrutable sound has found its audience in the international community, but sets its sight on the Americas. Now the pair emerge once again—in a vastly different sonic landscape than ever before where weird is the norm and genres have melted away—to take techno into the 22nd century. Ascending on bubbling grooves and razor-sharp changes in direction, the new Electrocado sound is a power-packed gallop through myriad moods, melodies, and tempos with an eye and ear on peak-hour, prime time, sweaty warehouse feels. And more songs about avocaodos. Musn’t forget one’s humble beginnings.