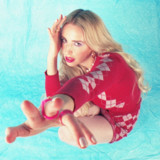 Laurel Arnell-Cullen, better known as Laurel, is a British musician currently based between Los Angeles and Europe. After writing, producing, and mixing her debut album Dogviolet herself, Laurel teamed up with producer Chrome Sparks to create a 2-part EP project that draws inspiration from new relationships, new travels throughout the American West, and most recently, the experience of isolation as a foreigner during a global pandemic. The first single from the EP project, titled “Scream Drive Faster,” encapsulates Laurel’s evolution and the sunny euphoria of living in California, while retaining the heart of her earlier music created alone in her bedroom studio in London.