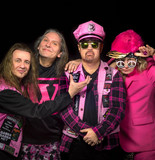 A satirical metal act from Erlangen, Germany, J.B.O. (originally known as the James Blast Orchester, but the band had to change its name to the abbreviated form due to a legal matter) formed in 1989. The band got its start and came to popularity with satirical and humorous cover versions of rock and disco. In 2000, the group decided to create original material. The band has released more than 25 albums between 1994's Eine Gute CD Zum Kaufen! and 2007's Head Bang Boing, the latter a Top 40 hit in Germany. J.B.O. spent the majority of that year (2007) touring Central Europe. I Don't Like Metal, I Love It was released by the group in 2009. ~ Chris True, Rovi