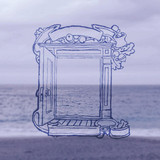 Originally from A Coruña and based in London since 2009, Miguel Zapata started his music career in 2006 as a former member of the Bob Dylan tribute band The Highlights. His work is richly lyrical and deeply influenced by the late 60s and early 70s psychedelic folk and pop sounds from the UK and the US. Creative-commons netlabel Vulpiano Records started releasing his music back in 2010 with the compilation “Songs 2006-2009”. This was soon followed by an EP and his first cohesive full-lenght, The Long Trick (2018), which was also released as a limited edition LP. The same label releases his second album, “Triangle” in 2018, which much like his previous work, is completely self produced. This album also sees a very small number of copies in limited edition vinyl. He continues collaborating with other singer-songrwriters and bands in London, as a songwriter and illustrator.