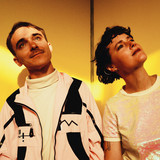 In summer 2015, after a year of intense touring, Rubblebucket’s Kalmia Traver &amp; Alex Toth began the process of bringing their next record to life. As an experiment, Kalmia asked Alex (her longtime romantic partner) to move out while they worked on the album, then accepted the marriage proposal he made during a recording session just a month later. Although Alex soon moved back in, their 11-year relationship ended when the two chose to ‘consciously uncouple’ the following spring—a decision they honored by ceremoniously giving each other matching triangular daisy tattoos (a nod to the title track from their 2010 EP). But despite all the sadness brought on by their breakup, Kalmia &amp; Alex kept on writing and recording together, ultimately creating Rubblebucket’s most transcendent album to date. Sun Machine documents the pain of ending their romantic relationship, yet emerges as an unbridled and often-euphoric celebration of their lasting connection. While the breakup inspired much of the album, Sun Machine is deeply informed by other life-changing occurrences in recent years: Kalmia’s diagnosis with ovarian cancer in 2013 (followed by a round of surgeries and chemo treatments), Alex’s decision to get sober after a long struggle with alcoholism, and the couple’s 3-year-long attempt at maintaining an open relationship. The result is a strange &amp; beautiful paradox: a party album rooted in radical mindfulness, a breakup record imbued with each partner’s palpable love for the other.