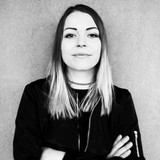 Faia (Femmes Fatales, Romklang Records, Small Records, NO) Ever since she started spinning records in 2009, she has been a sought-after DJ and club promoter. Faia has played at most of the techno and house clubs in Oslo. She also has gigs in Norway's major cities, and playing at clubs and festivals around Europe. In 2015 she had her first Berlin gig in the main room on one of the best underground clubs; Rummels Bucht. Since then she's played at Golden Gate and Bohnengold, Technodisco, Stroga Festival and Sandsteinhöhlen in Germany. In 2016 and 19 she was booked to Copenhagen's famous house & techno club Culture Box, and has played at Burning Man Week 2017. In Thailand she's played at Jai Thep Festival and events in Chiang Mai and Koh Phangan. Back in Oslo she's had a 5 year residency at the techno-basement The Villa, with the 10 year old concept 'Femmes Fatales', where she books Norwegian and international female DJs. The concept was moved to club Elefant in 2017, where she also had the 'Deep Fridays' events. She's played alongside well known artists like: Oxia, Martin Dawson, Nic Fancuilli, Pig&Dan, Ida Engberg, Per Hammar, Djuma Soundsystem, Matthias Meyer, Attaboy, Nastia, BeSvendsen, Guy J, Kruse and Nuernberg, DJ Hell, Turmspringer, Insolate, Beddermann & Dahlmann, Luigi Rocca, Ben Klock, Recondite, Gabriel Ananda, Thomas Schumacher and Moog Conspiracy. Faia loves being behind the decks, and that also reflects the drive, energy and playfulness in her choice of music.