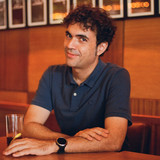 Jaime Córdoba is a Spanish pianist, composer, producer, singer/songwriter most known in the last few years for its New Age Jazz flavored Pop piano pieces, he is a very prolific author.   His music is a little bit eclectic,combines solo piano pieces with pop compositions,rock sung themes even comedy.   At the age of 8 he started taking classical piano lessons. All that changed when he discovered Paul McCartney´s “Give My Regards to Broad Street” album.   Córdoba has developed a solid career starting playing in Madrid local pubs and then touring and recording with bands as pianist/songwriter.   His solo career debut album “Micrófonos en la Basura” was released in 2008.   By now he has published 3 pop/rock sung albums and more than 150 piano pieces including Covers and Originals (you can find them on his playlists “Piano Pieces by Jaime Córdoba” and “Pop Piano Covers”).   His versatility ,combined with his melodic skills, charisma and inexhaustible creativity has becomed his calling cards.   As a soloist artist he has recorded pop (with band), piano instrumental and music covers albums.   He writes urban style lyrics moving away from the usual formula of lyricists who only talk about love.   Jaime Córdoba also has a big presence in Social Media, he publishes Original Piano Videos every week.   He has created several Video Series including One Minute Piano,Random Songs, and Piano Sessions where he plays live music on audio/video.