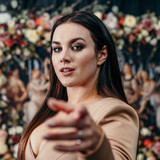 A teen pop singer who got her start at a very young age, Ewa Farna (born August 12, 1993, in Trinec) is based in the Czech Republic, but Polish by birth. She first made a name for herself after winning some local talent competitions, and in 2005 scored a top placement in the European Youth Festival. In 2006, she followed her success with another victory, this time scoring top honors in the Polish television talent competition Szansa Na Sukces, and Farna would also release her debut album, Mels Me Vubec Rád, that year. In addition, Farna took home a handful of "Revelation of the Year Awards" from a number of sources. Her 2008 album, Ticho, was also a hit, peaking at number two in the Czech Republic. Cicho followed in 2009. ~ Chris True, Rovi