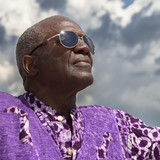 The sky-high level of soulful intensity John Ellison brought to his lead vocals with the Soul Brothers Six came straight from the church. No surprise there, since he grew up in a religious household. But the way Ellison harnessed that sanctified passion on the group's secular sides was anything but common. Leaving the coal mines of West Virginia for a more musically opportune Rochester, NY, at age 18, Ellison sang soul and styled hair before hooking up with four brothers named Armstrong (Sam, Charles, Harry, and Moses) and bassist Vonell Benjamin. The Soul Brothers Six were a completely self-contained unit; they played their own instruments in addition to singing. Their first 45s on Fine (1965's "Move Girl") and Lyndell ("Don't Neglect Your Baby" the following year) veritably dripped gospel-soaked inspiration but went nowhere. The sextet decided to relocate to Philadelphia. On the way there, Ellison wrote the magnificent "Some Kind of Wonderful," the song that put the group on the map. Atlantic Records issued the irresistible soul workout in 1967, and it slipped onto the pop charts (becoming their only hit). Deserving encores on Atlantic didn't recapture the 45's success, and the original lineup broke up in 1969. Ellison assembled another band by the same name and soldiered on at Phil L.A. of Soul Records during 1972-1973. Meanwhile, Grand Funk Railroad's graceless cover of "Some Kind of Wonderful" proved a gigantic pop smash in 1974. The John Ellison story might have ended there (he's mostly been ensconced in Canada since then). But not too long ago, After Hours Records bosses Marty Duda and Gregory Townson happened upon the long-lost legend sitting in at a Rochester gin mill with bluesman Joe Beard. The upshot was a 1993 solo Ellison disc, Welcome Back, that reintroduced the singer to the American market. Two tracks, including a remade "Some Kind of Wonderful," even reunited the singer with the Armstrong brothers. Pretty wonderful, eh? ~ Bill Dahl