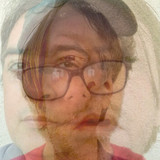 ‘Mod Prog Sic’ is Black Dice’s seventh full-length, and their first in nearly a decade. It’s a wildly propulsive record. It never touches the disassociate state found across so much of their discography, working instead in the harried moments of euphoria that linger just before such breaks. Basslines strain at the end of their leashes, tones bounce like gravity is being switched on and off. Their command is absolute, a choreography performed upon listeners. For all 25 years of their existence, Black Dice have loomed as an unrivaled, unforgettable, and influential force. Their performances are forceful, full-body experiences, with listeners afterward describing the singular kink of feeling their skeletons vibrate. This understanding of the physical force of sound has endeared Black Dice to both the damaged youth of DIY warehouse shows and the erudite spectators of vaulted galleries. This specious contradiction carries through to their community, seeing them thrive equally on underground labels like Troubleman, Animal Collective’s Paw Tracks + DFA. Black Dice's recorded legacy reveals an obsessive focus. This fixation on craft and composition exposes a restlessness that pushes each record to a distinct edge, impossible to conflate with anything in their discography, let alone another band. The band's disquiet, their relentlessness + work ethic, their shimmering, howling, lurking thump belongs to them only. PS: also check out the music of Eric Copeland