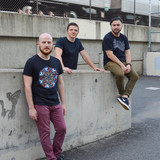 A Shrewdness of Apes

A Shrewdness of Apes started as an acoustic duo with Ian Mabley and Dave Greek in Richmond, VA in 2013. After the addition of a drummer and a few rotations of lineups, they developed into a progressive rock trio, influenced by Queens of the Stone Age, Tool, Yes, and Alice in Chains. As the remaining original member, Ian Mabley moved to DC in 2014 and continued the project with new members Sumeet Mahal and Jared Coffin. It is with this lineup that they recorded the band's first full-length album, which was later released in 2019. With the current lineup of Chris Sciotto and J.R. Franks, the band made it to the finals for best hard rock song, album, and artist of the D.C. area's 2020 Wammie Awards. They made it to the finals again in 2021 for Best Hard Rock Artist. Whether it's acoustic riffs, dizzying time signatures, or monolithic electric guitar solos, expect the musically unexpected with A Shrewdness of Apes.