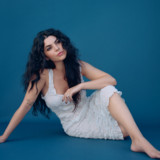 Under the name of Kai,

the Toronto-born and Los Angeles-based singer, songwriter, and producer joined forces with Flume as a co-writer and featured vocalist on the multiplatinum GRAMMY® Award-nominated banger “Never Be Like You,” lent her voice to everyone from Skrillex and Diplo to Childish Gambino, generated north of 1 billion streams, and earned acclaim from UPROXX, Populist Magazine, and more. In 2021, she introduces herself under her given name, Alessia De Gasperis, and lets her voice and spirit shine like never before.